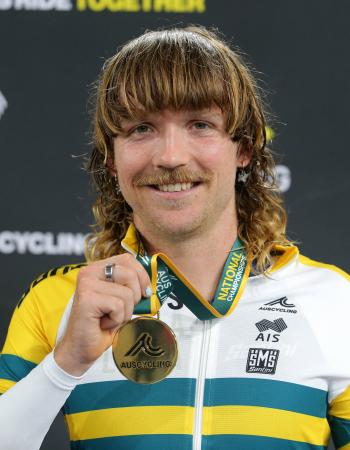 Donohoe grew up in the Northern Territory dreaming of becoming an elite sportsperson. However, a freak accident at age 15 almost cost him his right arm: a rope swing wrapped around his arm as he jumped into a creek, severing most of his biceps and triceps.

He had begun cycling a few years earlier through a triathlon club. So, after his accident, he made it his goal to get back on the bike.

After moving to Melbourne to finish high school, Donohoe made his international debut at the 2013 UCI Para-cycling Road World Championships in Baie-Comeau, Canada. There, he won bronze medals in the C5 time trial and road race.

In 2014, he won a world championship bronze medal on the track in Aguascaliente. Later that year, he became a world champion for the first time when he won the C5 road race in South Carolina.

As well as his para-cycling achievements, Donohoe raced competitively in the domestic peloton. In 2015, he finished third in the under-23 men’s road race national championship behind Miles Scotson and Alex Edmondson.

That year, he defended his C5 road race world title and also won his first rainbow jersey on the track in the scratch race.

2016 saw Donohoe make his Paralympic debut. He won silver medals in the individual pursuit and road time trial, and was on course for another medal in the road race before colliding with another rider.

After the Rio Games, Donohoe continued to collect rainbow jerseys on track and road, taking his tally to eight world titles by the end of 2020.

He made his second Paralympic appearance at Tokyo 2020, where he won another silver in the individual pursuit and bronze in the road time trial before finishing fifth in a wet, crash-marred road race.