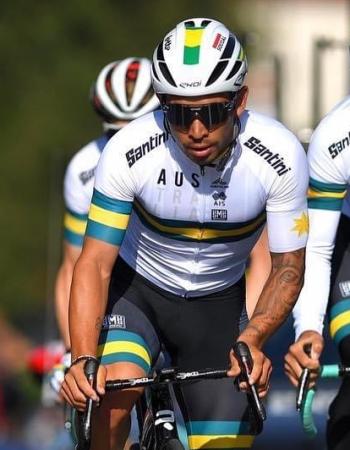 Before Caleb Ewan became one of the fastest road sprinters in world cycling, he was a standout junior on track and road.

Hailing from the Southern Highlands region of NSW, by the age of 18 Ewan had won the junior omnium world championship, two junior national titles on the road and three on the track.

Continuing this trend as an under-23, Ewan won a national road race title, three stages of the Tour de l’Avenir and a silver medal at the UCI World Championships in Ponferrada.

Ewan turned pro in 2015 with Orica GreenEDGE and rewarded their investment by taking his first Grand Tour stage: a bunch sprint in the Vuelta a España.

Over the next three years, he built up his palmarès with his first stage win at the Giro d’Italia, seven stages of the Santos Tour Down Under, a win at the Cyclassics Hamburg and three consecutive criterium national titles.

By now, the ‘Moss Vale Missile’ was known for his extremely low body position and his ability to tackle short climbs better than most pure sprinters, hence his two second-place finishes at Milan San-Remo.

2019 saw Ewan claim one of the greatest prizes in cycling: a stage win at the Tour de France. He won three Tour stages, two Giro stages and the Brussels Cycling Classic, earning the Oppy Medal.

Ewan added two more Tour de France stage wins in 2020, plus a win at Scheldeprijs, and continued to cement his status at the top of the sport.

As at the start of 2022, the prolific sprinter has over 50 pro victories to his name, including 11 Grand Tour stages.

He has represented Australia at the Commonwealth Games (2014) and twice at elite level at the UCI World Championships (2016, 2021)