AusCycling | ‘That was all on instinct’: First WorldTour win for Alex Manly
ROAD

‘That was all on instinct’: First WorldTour win for Alex Manly

The South Australian took out stage 4 of the Tour of Scandinavia overnight, outsprinting fellow Aussie Chloe Hosking from a late breakaway.

It’s Manly’s first win at UCI Women’s WorldTour level, adding to her haul of victories at the Lotto Thüringen Ladies Tour back in May. 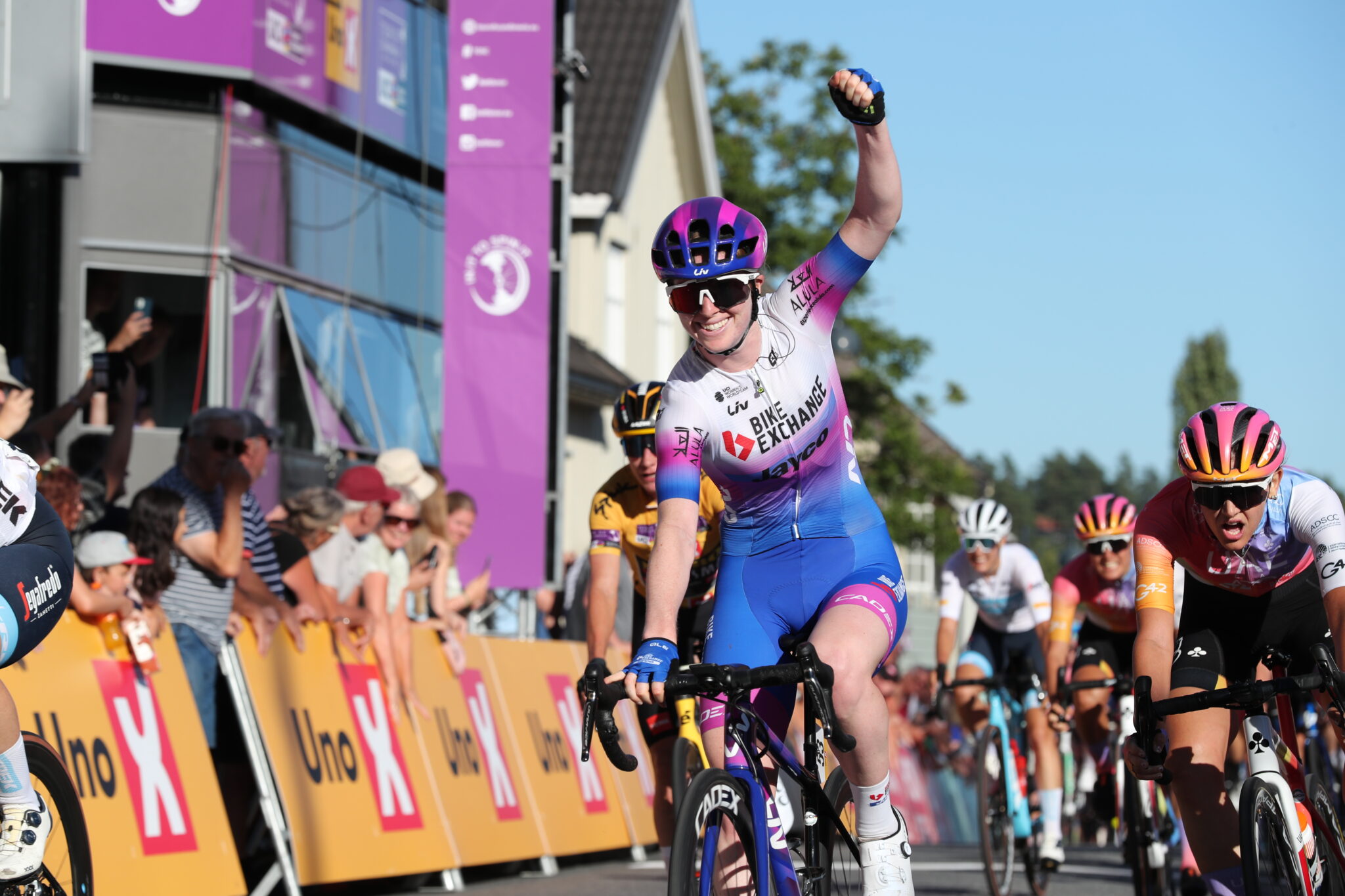 “It feels a bit surreal to be honest,” Manly said.

“I’ve been trying to do this all year and kept making mistakes. Today, it wasn’t the plan to do what I did, but the moment was just there, and I couldn’t not take it.”

The win rewarded Manly’s aggressive instinct on the rolling 119.2km stage from Askim to Mysen in Norway.

Instead of waiting for a bunch sprint (and another inevitable win for Dutch veteran Marianne Vos, who had won the first three stages), Manly and Team BikeExchange-Jayco went on the offensive.

With 10km remaining, Manly broke clear with British rider Alice Barnes (Canyon-SRAM Racing). The duo never gained much of a gap – only a few seconds at most – but, when another four riders bridged across with 3km to go, they had a real shot at victory. 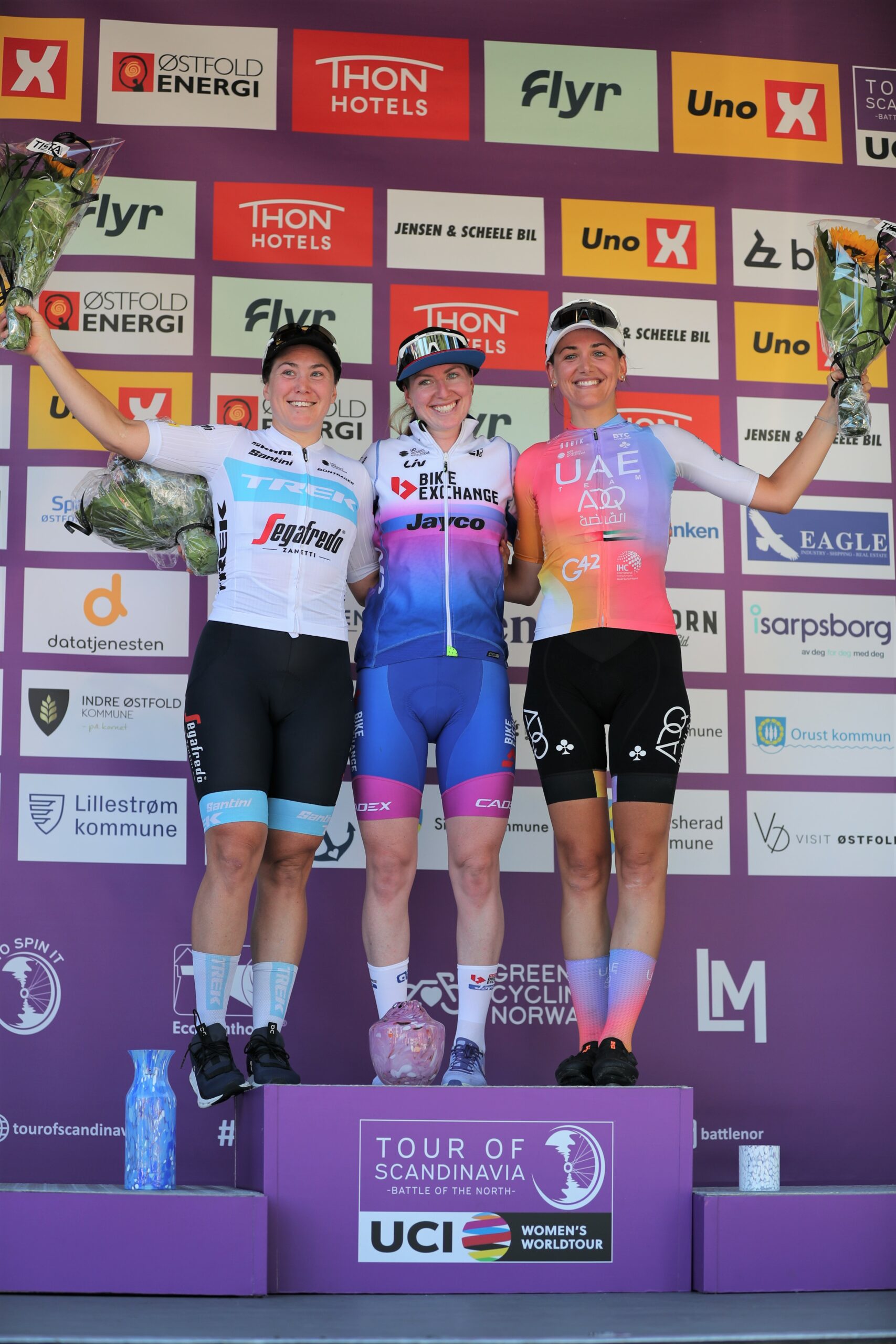 Canberra’s Chloe Hosking (Trek-Segafredo) and Melbourne’s Neve Bradbury (Canyon-SRAM Racing) were among those who made the junction, putting three Aussies in a breakaway of six.

The peloton chased hard behind, but after Bradbury sacrificed herself to lead out trade teammate Barnes, the group had enough advantaage to contest the slight uphill sprint for the win.

When Manly launched from 200m to go, it became a one-on-one drag race with Hosking, even as Vos reached their rear wheels with her own sprint from the peloton.

With a bike throw, the double track world champion edged out Hosking by half a wheel.

Catch a replay of the race over on GCN+ 👉 https://t.co/8FSJcLL3Gx pic.twitter.com/pcMJFi18NI

“We really wanted to make it an aggressive race, but when attacks kicked off we were quite tired. At the end, it opened up again because we’d made it hard in the middle,” Manly said, explaining the tactics of Team BikeExchange-Jayco.

However, she revealed that the late breakaway hadn’t been in the team’s pre-race strategy.

“I thought I’d take a lesson from Luke Plapp – when you feel good, you go!”

The Central Districts Cycling Club rider was also part of the national squad that delivered road race gold for Australia at the Commonwealth Games last week.

This is her first full season on the road since representing Australia in track cycling at the Tokyo 2020 Olympic Games. It’s turning out to be a hugely successful one.