Grace Brown and Rohan Dennis grabbed the headlines yesterday, but Day 2 of RoadNats celebrated roadies of all kinds and colours.

The Club Teams Time Trial is a race for the cycling clubs of Australia; a triumph of participation, teamwork and club spirit.

Bringing teams of four together to complete the course as quickly as they can (or as gently as they like), the Club TTT challenges riders of all levels to aim for their best. For some, that’s a green-and-gold champion’s jersey.

Here are three stories that came out of today’s event at the 2022 Federation University Road National Championships. 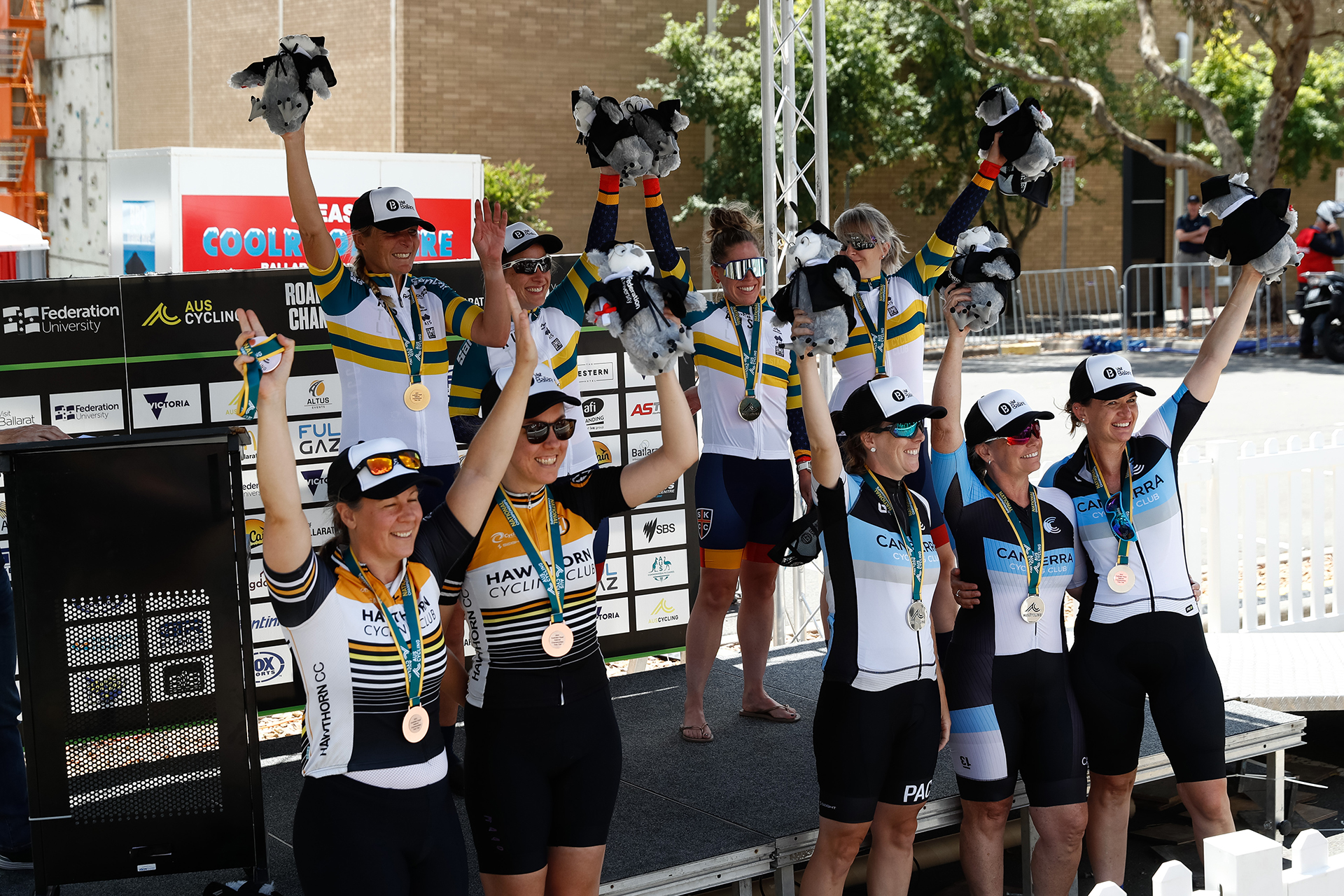 Melinda Cockshutt is a mother in her forties who hails from Port Macquarie on New South Wales’s mid-north coast.

She’s a member of her local club, but today, she won the Masters 90+ national title for Victoria’s St Kilda Cycling Club, based some 1,200 kilometres from home.

The AusCycling rules say that if your primary club isn’t participating in your event, you can race for another club. That’s given Cockshutt the chance to ride with a trio of women she met online.

“I met these lovely ladies on Zwift on the Aussie Hump Day Ride – the ladies Purple Armada team – and we just started chatting,” Cockshutt said. “I was down here, there's no one from Port Macquarie, so they asked me to come along and join St Kilda. That was two years ago, and I've ridden with them every year since.”

Despite living in different states, Cockshutt said the Zwift virtual cycling platform allowed her team to practise ahead of the title race.

“Last year, we were very nervous because we hadn't ridden [together] before. Whereas this year, we sort of had an idea,” she said.

“We do team time trials on Zwift. I know it's not out in the open but at least there is some thought about the process of team time trialling. So, we just use that information and just communicate lots while racing.

“We know each other's strengths and weaknesses, so we put the descenders on the front with descending and the climbers on the front when we are climbing. We just rotate through to make sure that everyone gets to use their strengths.”

IST: creating pathways for young cyclists with an intellectual disability 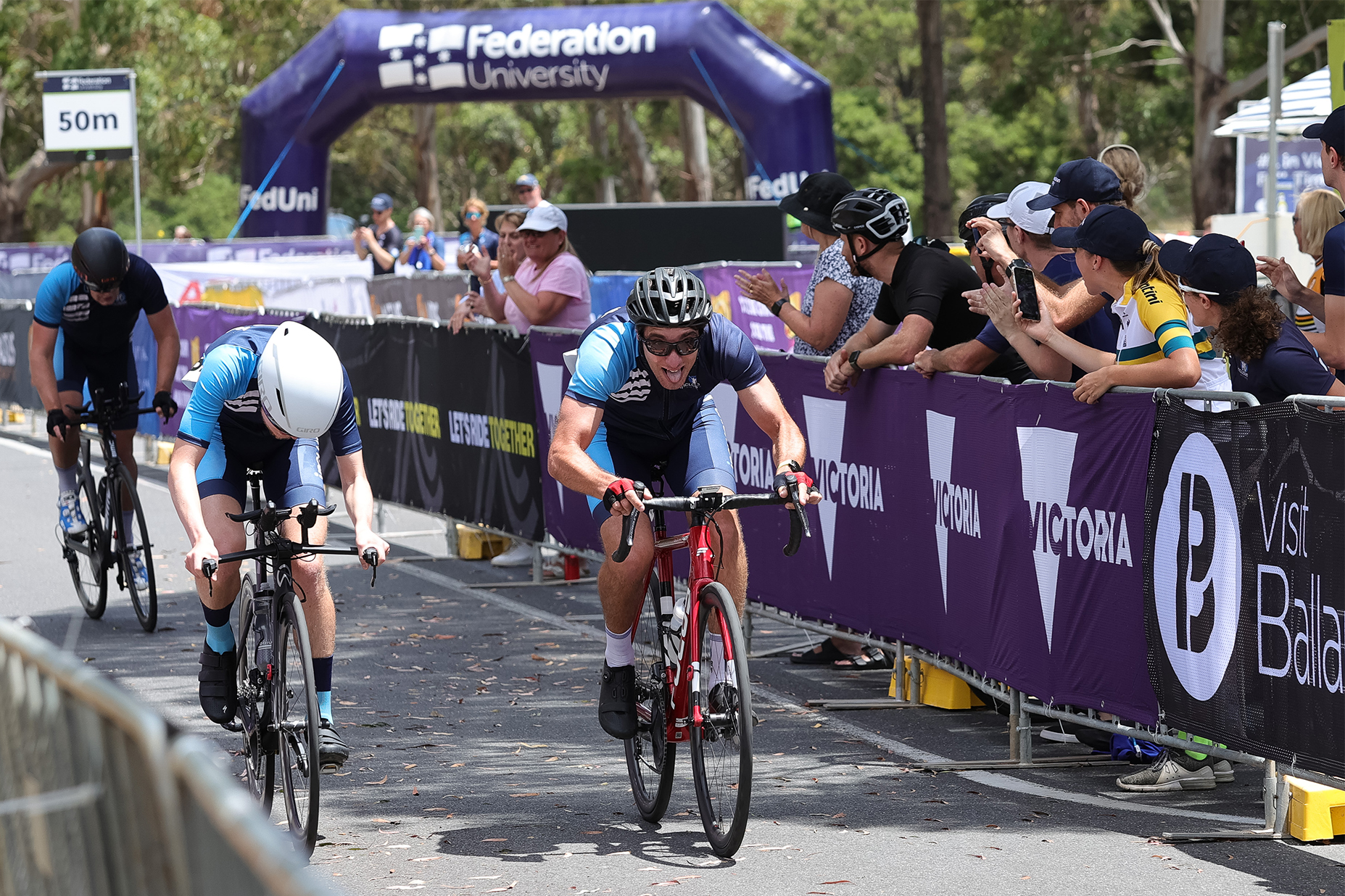 The team from IST gets cheered to the finish. (Photo: Con Chronis)

Perhaps the largest, and arguably the most enthusiastic, cheer squad today was the blue-and-white army from Inclusive Sports Training (IST), a business that trains young athletes with an intellectual impairment.

“It’s a group that coaches kids with primarily an intellectual disability. In sport, that means below 75 IQ and a result on the behavioural adaptive test,” Gosper said.

“But we also are including now II2 athletes, which is code for more high-functioning autism, and a lot of the athletes also have comorbidity. So, they might have an intellectual disability but we also might have an amputee or vision-impaired [athlete],” she said.

Gosper says the athletes have come a long way since she founded IST six years ago with 15 athletes.

Back then, she said, “to even ride a bike around a one-kilometre loop was phenomenal”.

“But now, the athletes that started with me, many of them are very into the racing – not everybody, but we’ve had to expand the group, get in more coaches.

“At the very start I could run and cycle as fast as the kids but now – no way.”

Today, the IST team from Preston Cycling Club received the loudest applause of all when they crossed the line in fifth place in the Open Men’s category, completing the course in a time of just under 56 minutes. 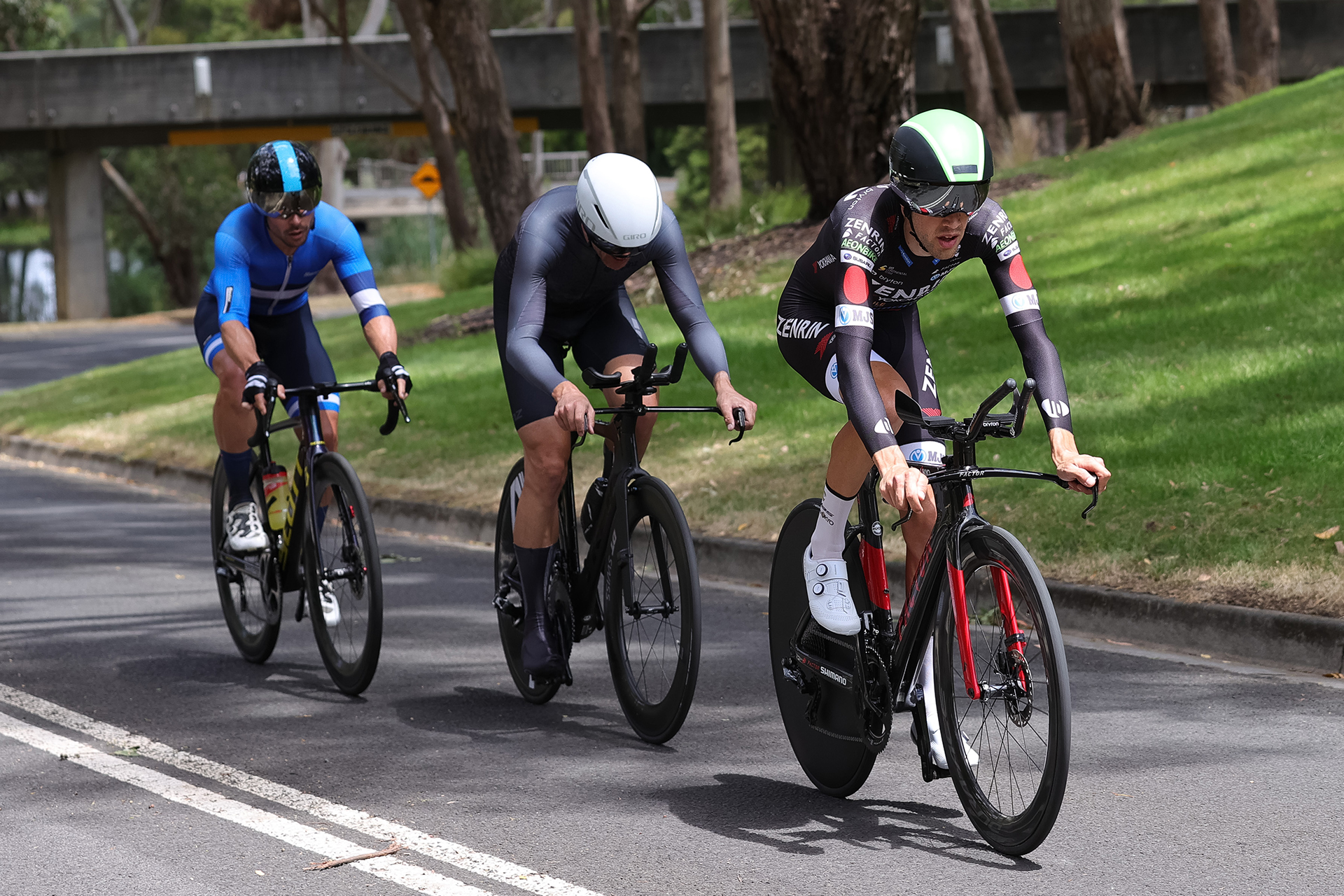 If you watch professional cycling, you might recognise the slim figure of Ben Dyball from the Vuelta a España two years ago.

The elite mountain climber, who’s been the Oceania champion and won professional races in Asia, competed at the world’s highest level of cycling in 2020.

Now riding for Japanese outfit Team UKYO, it’s clear that the 32-year-old from western Sydney has kept in touch with his roots despite his success.

“I’ve been with this club for a long time now and I do their local racing nearly every week when I'm at home, so I race with these guys a lot,” Dyball said about his fellow champions Peter Wakefield, Paul Eberle and Nick Spratt. “It’s good to ride with all the guys I race with every Monday.

“It was good fun to do a team time trial. I haven't done a lot of them and it was good to do something different.”