Western Australian Conor Leahy became the new holder of the national record for the individual pursuit and a three-time national champion on #TrackNats22 Tuesday, knocking over the 11-year-old record during qualifying at Anna Meares Velodrome.

Leahy eclipsed Jack Bobridge’s 2011 record of 4:10.534 with a time of 4:10.113 to book his spot in the gold medal final against childhood neighbourhood friend Oliver Bleddyn (SA).

The Australian Cycling Team rising star would go on to best Bleddyn for gold with a time of 4:13.225 to notch his third consecutive individual pursuit national championship. 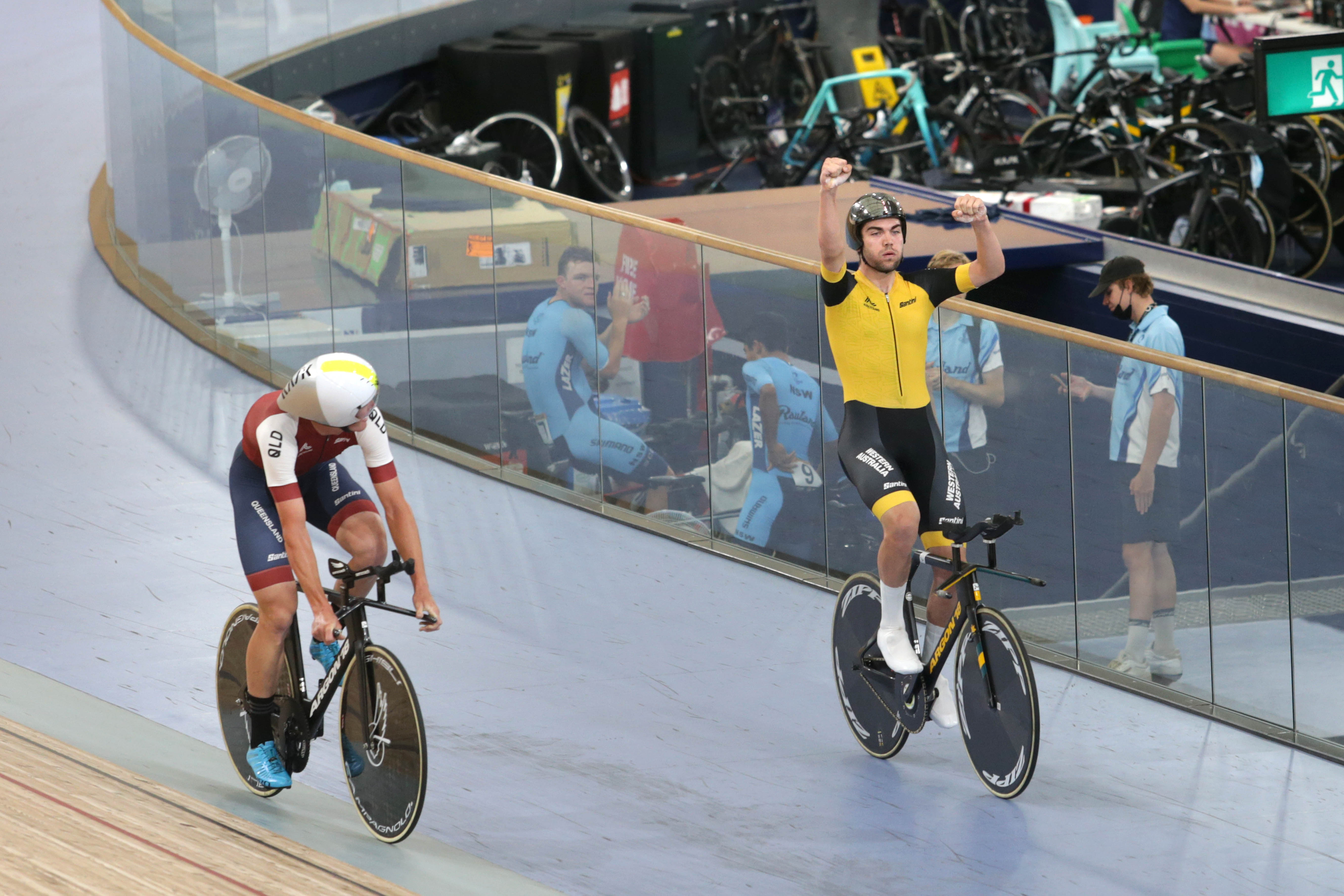 “It’s unreal, I’ve been hunting that record for a while,” Leahy said.

“I wanted to go under the 4:10 barrier but, I mean, you’ve got to take what you can get sometimes.

“To race Oli (Bleddyn) in the final is pretty surreal – we've grown up together.

“He’s a few years younger than me and I’ve seen him grow into such an amazing athlete and I know he’s going to be pushing me for the next few years which is going to be annoying but it’s good to see for him.

“We grew up in the same neighbourhood (in Western Australia) so to be here representing different states is pretty mind-blowing.”

There is still plenty of time on the clock to shave off for Leahy, who unofficially has ridden a 4:06 at Anna Meares Velodrome during last year’s lead-in to the Tokyo 2020 Olympic Games, where he was a travelling reserve member of the team. 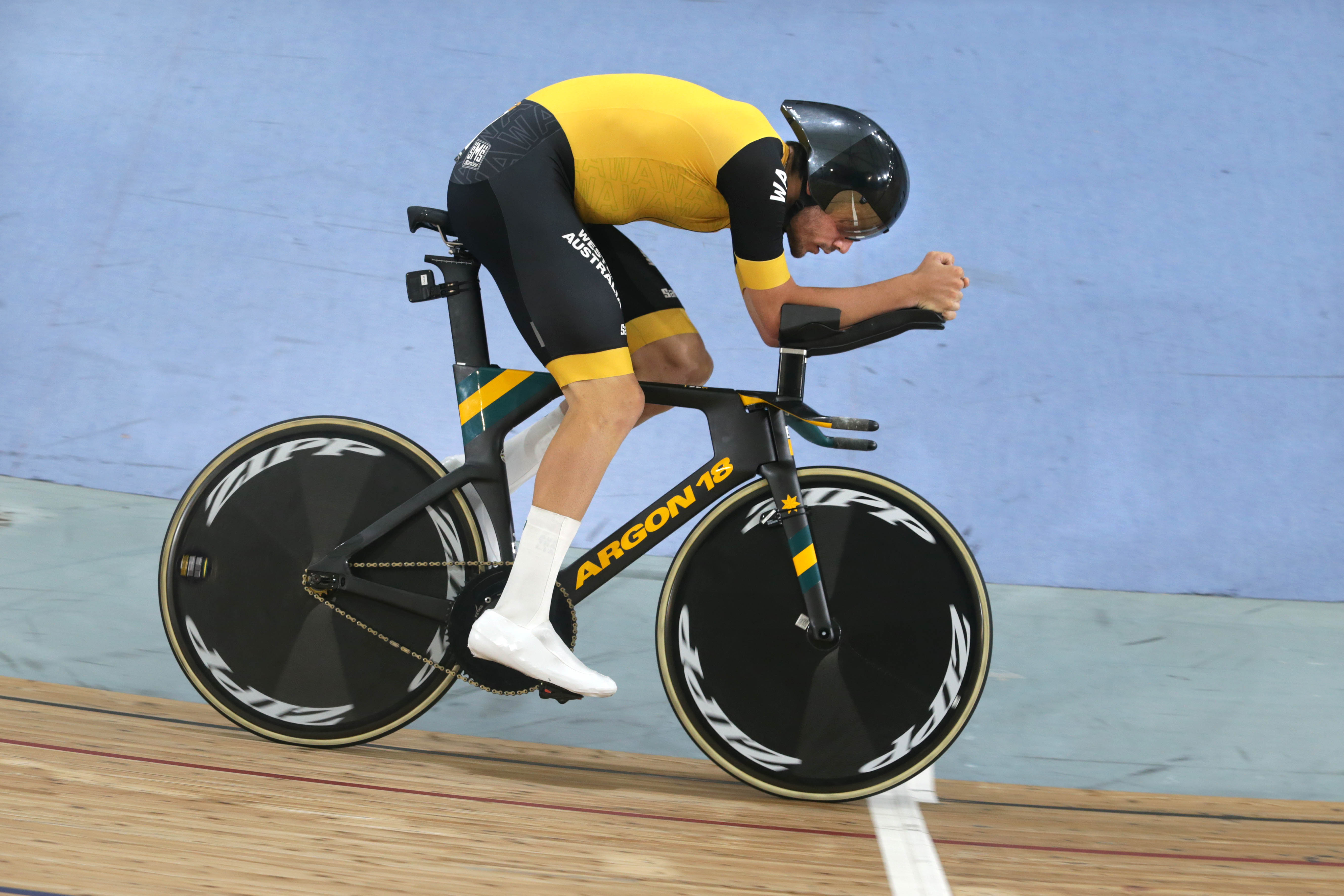 Staggeringly, Leahy said he set a power personal-best during qualifying, pushing out 15 watts more than his 2021 4:06 training time.

“I’ve probably known I’m capable of it for two years, but things just hadn’t lined up – I've had crashes, broken bones or just haven’t had the best lead-in,” Leahy said.

“Pretty stoked to put it together this year and put a good ride out on the track.

“There are some big races coming up, UCI Track Nations Cups and Commonwealth Games, which will be enormous if I get selected for that and there’s an individual pursuit there.

“I hope this has put me in a good stead to get selection for that event and team and hopefully things just get faster and faster.” 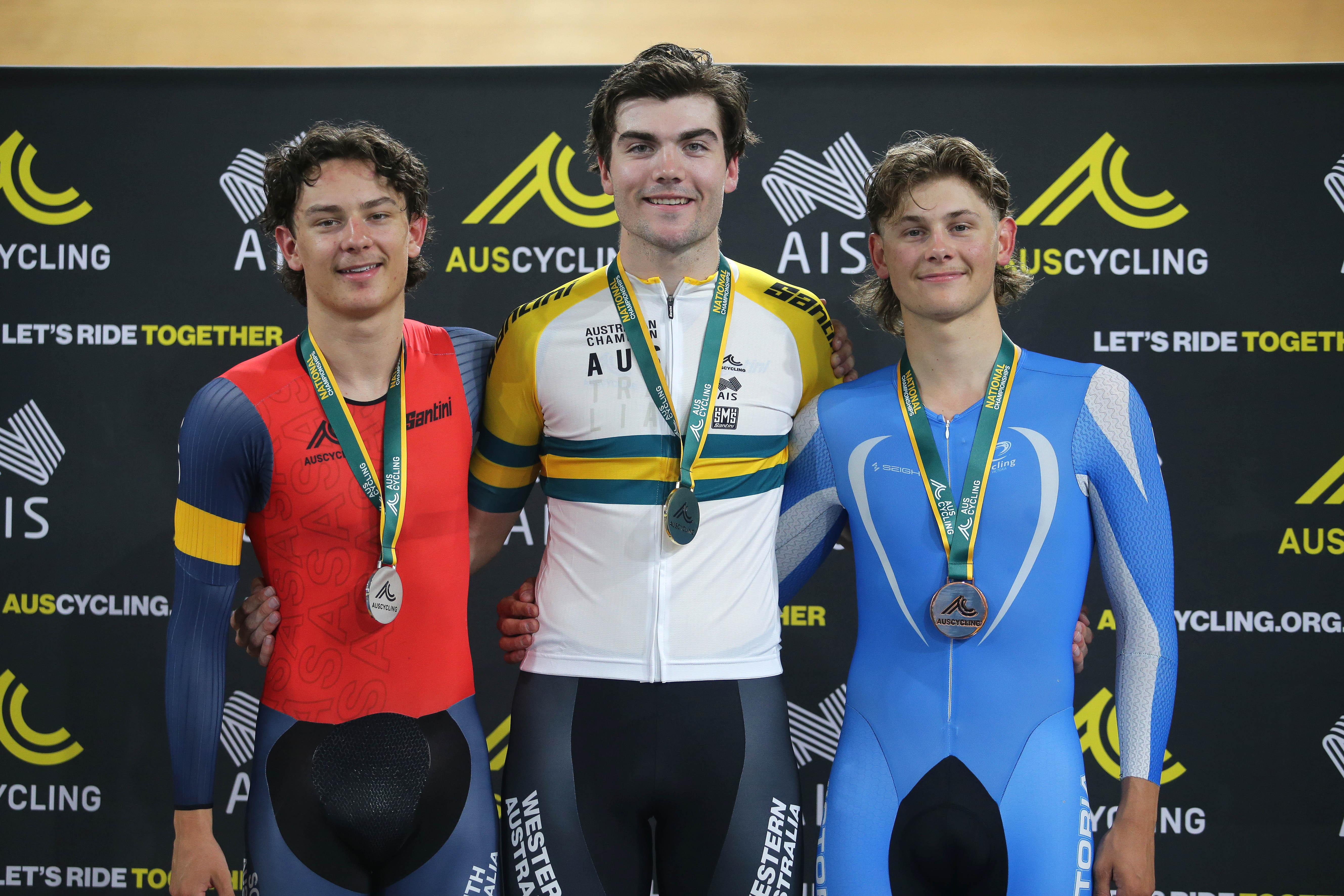 Victorian Blake Agnoletto claimed the bronze medal in a slick time of 4:17.465.

South Australia defended their women’s team pursuit national title on Day 4 of #TrackNats22 in a rapid championship record-setting time of 4:19.836.

The South Australian quartet of Maeve Plouffe, Amber Pate, Chloe Moran and Alli Anderson caught and passed Queensland seven laps into the gold medal final but were determined to push on and smash their own 2018 mark of 4:27.450, set by Plouffe, Annette Edmondson, Alexandra Manly and Breanna Hargrave.

“We wanted the Australian championship record, South Australia has a really rich history of doing really well in this event in the team pursuit at nationals,” Plouffe said. 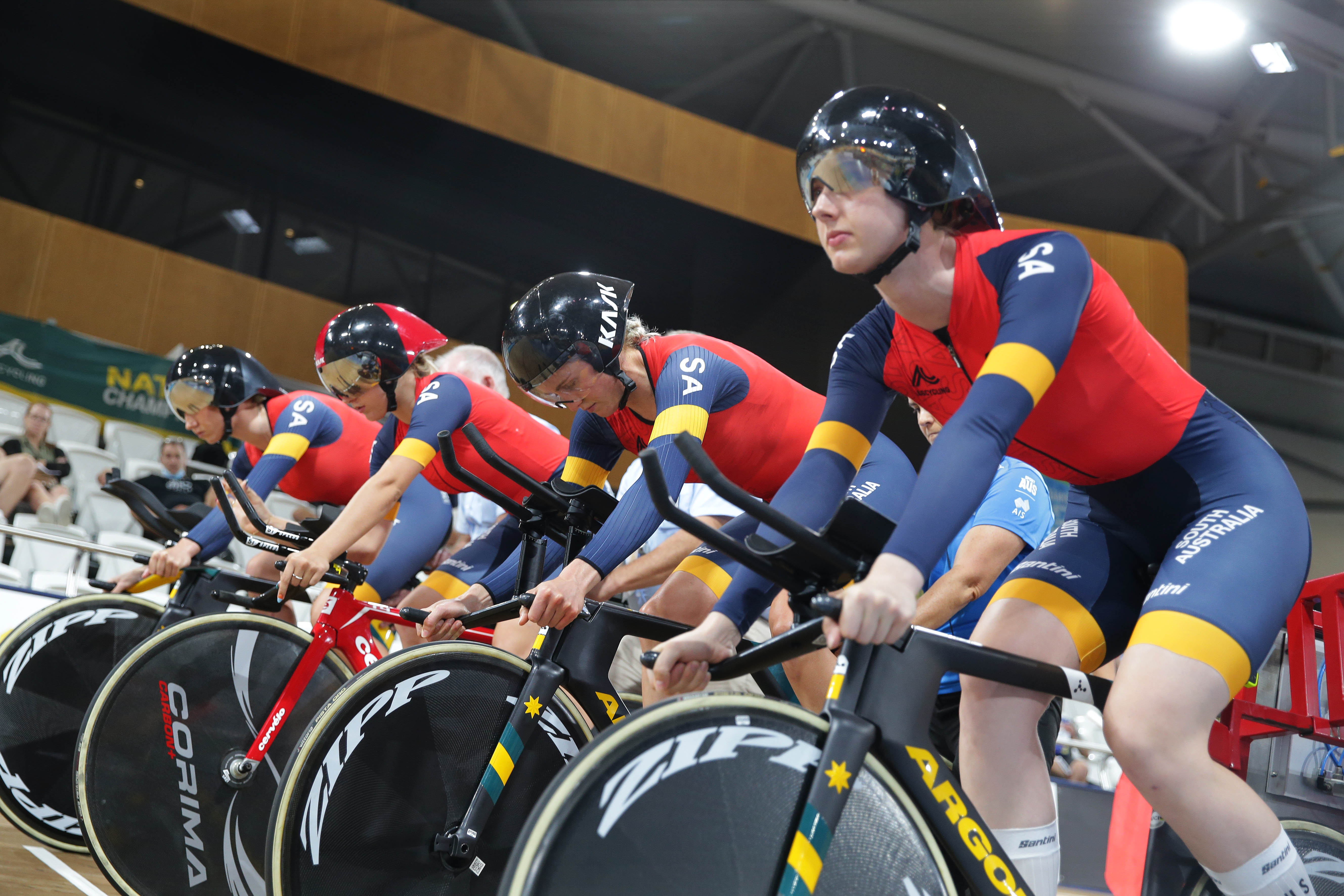 “We’ve had teams in the past with Olympic and world champions, so to break the Australian championship record out here tonight in Brisbane with this team is absolutely incredible and I think the girls deserved it.”

Tuesday’s success adds another crown to South Australia’s dominance in the women’s team pursuit event, only relinquishing the title once since 2016 to New South Wales in 2020.

“I think all the girls in the team were brought through the program by Brett Aitken, so that’s incredible and I remember being here in 2018 breaking the Australian championship record and I think I got dropped from that team actually,” Plouffe said.

“It’s always been a fast team; we’ve always been pushing records and to be around that always having someone up there to chase ... I think that’s an integral part of performance and going well. 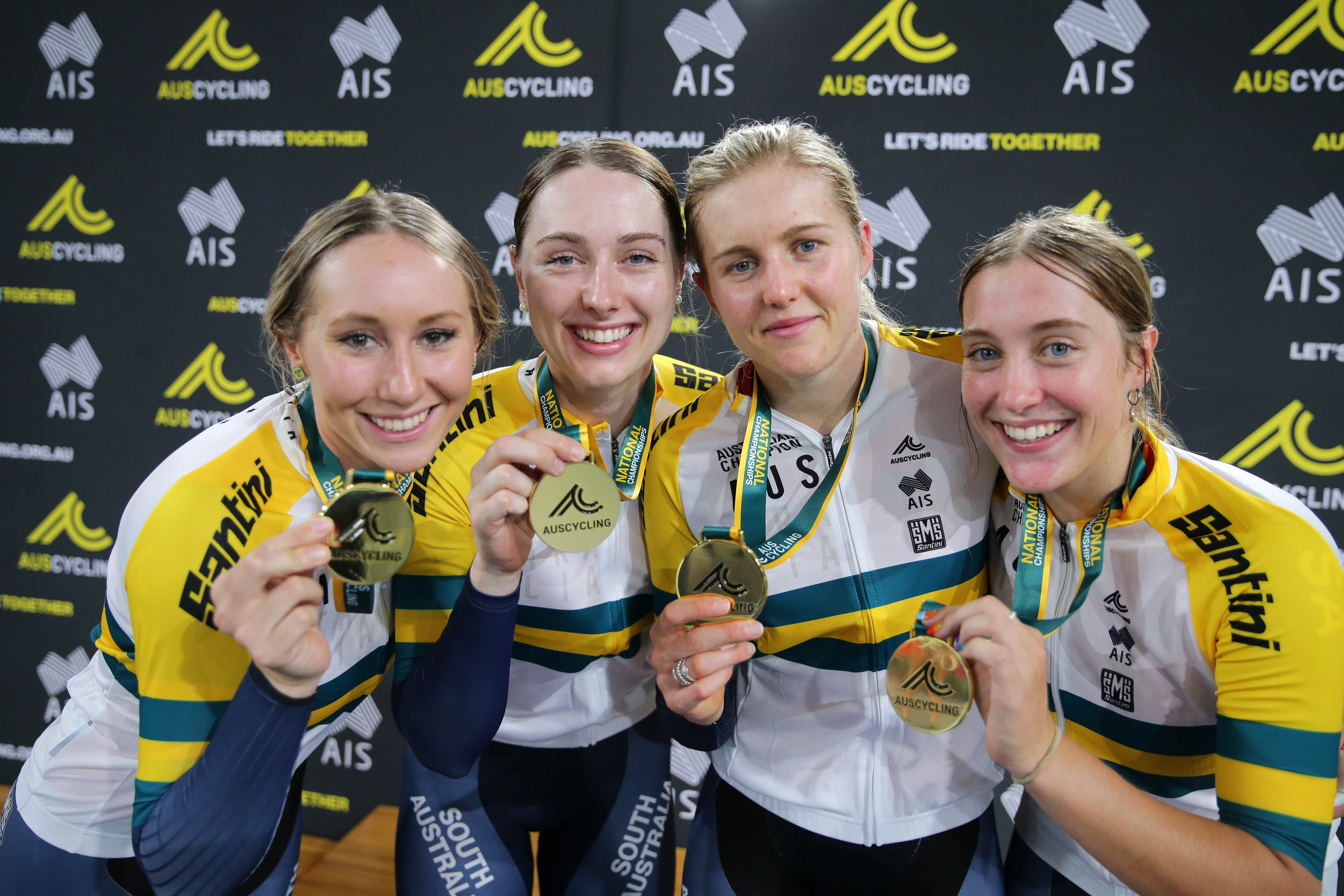 “This is also actually believe it or not the first time we’ve all ridden together as a team, obviously we’ve got some girls like Amber and Chloe in the Australian Cycling Team group in Adelaide and then the young girls are coming up.

“This is a great opportunity for the girls to get exposure to a fast team pursuit team and hopefully work their way up to Nations Cups and World Championship events.”

‘We had some fun and let it rip’: Queensland wins team sprint championship

In a statement of Queensland’s sprinting depth, three-time sprint national champion Kristina Clonan was rested for the event, with Molly McGill, Deneaka Blinco and Jacqui Mengler-Mohr holding down the fort for the home state. 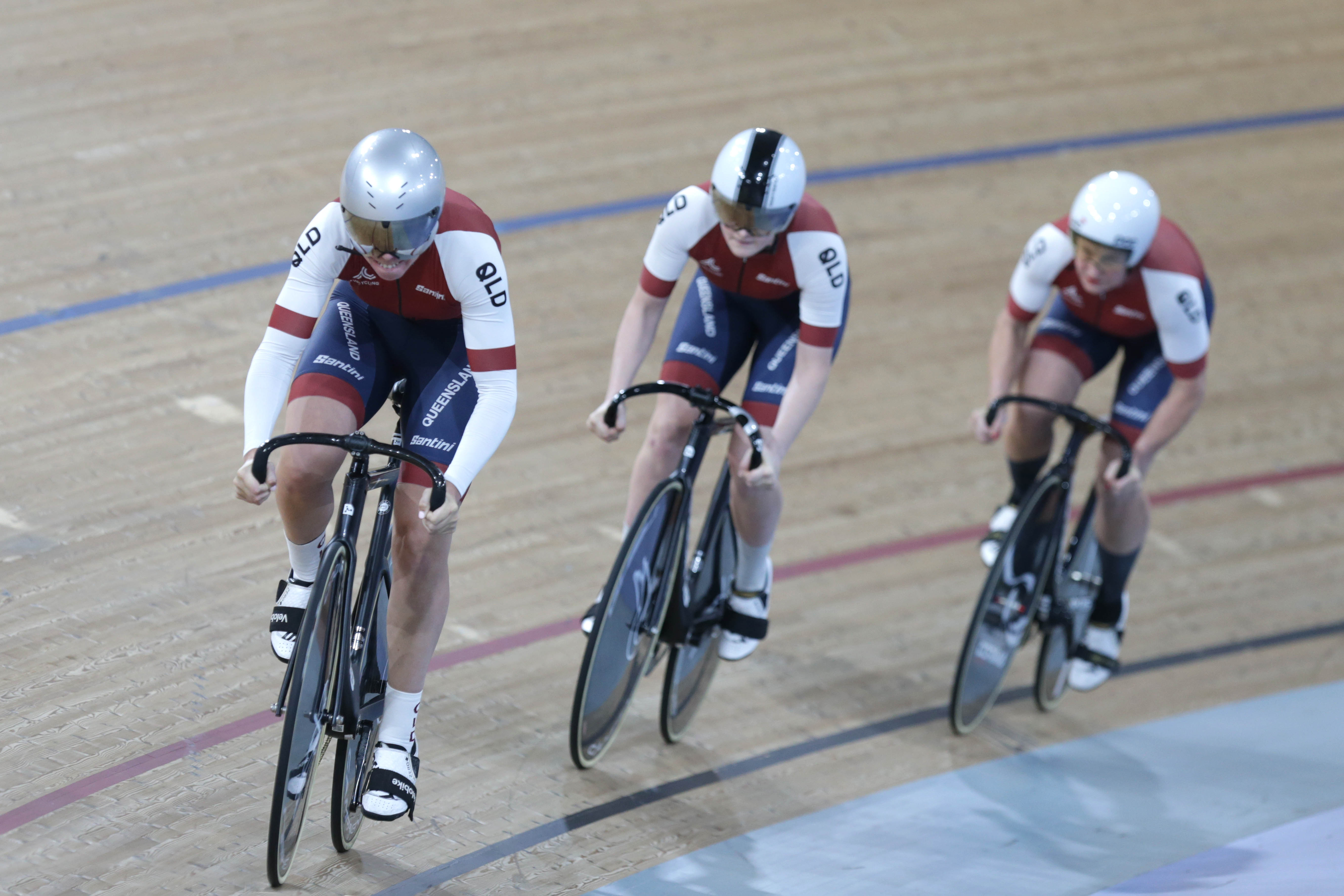 “It’s amazing, it’s such an honour and a privilege to race with these ladies,” Mengler-Mohr said.

“We’ve had a great time training and to deliver in qualifying and then to just get out and do it and become national champions is such a buzz.

“We might not have been the fastest on paper, but we were the closest-knit group, and we trained the most and we just got out there and had some fun and let it rip.”

The Queensland trio minus Clonan is a unique composition of athletes, with Blinco a first-year elite rider, Mengler-Mohr in her forties, and McGill a relative newcomer to track cycling from BMX as part of the AusCycling Fast Track program. 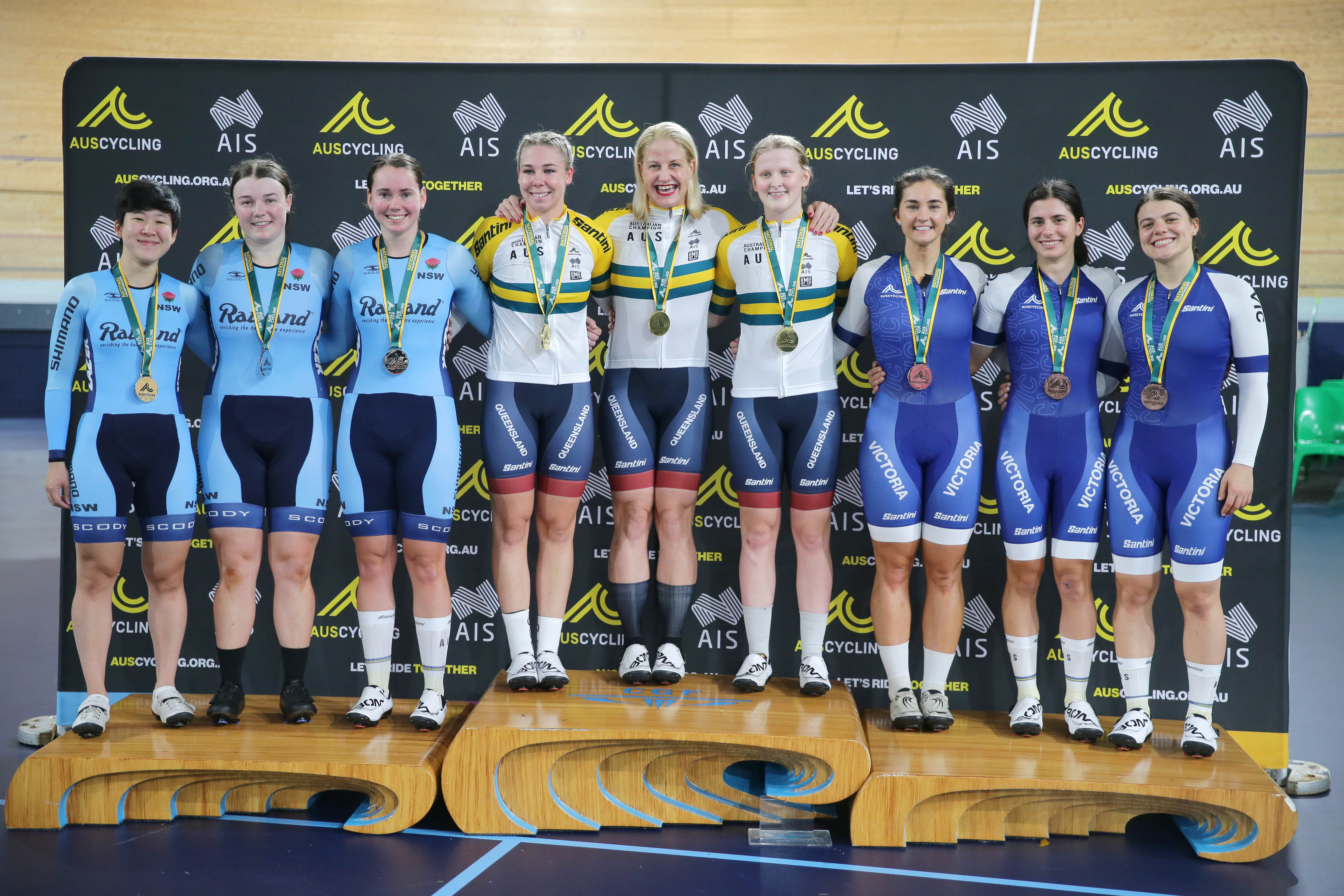 “We’ve had the fortune of being coached by Jon Andrews and Julian Elliott for the last few weeks, so we’ve got to hone in our skills because it’s a bit of an art, not a science the team sprint,” Mengler-Mohr said.

“We were so grateful to have Kristina’s support and she sent us words of encouragement throughout the day, the program was the program, as much as we would have loved to have raced with her we were so pleased that we were able to get out there and do it on our two feet, or pedals and wheels, and actually come close to that national record.”