AusCycling | Kate Bates
Back to Hall of Fame 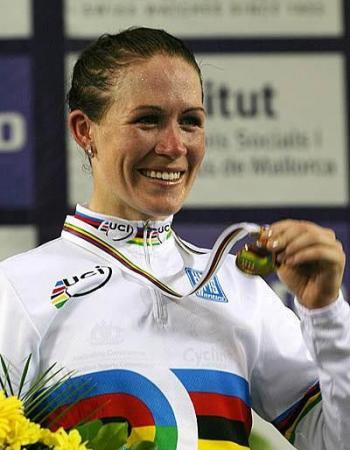 Sydney’s Kate Bates boasts a list of achievements and accolades worthy of a team of riders.  For this she has been inducted into the Cycling Australia Hall of Fame.

“I'm really honoured, I've dedicated my life to the sport of cycling, once as an athlete and now in administration, media and grassroots, and it’s exceptionally humbling to have this honour bestowed upon me. It's very special to stand shoulder to shoulder with some of the legends of our beautiful sport.

One of the world’s premier cyclists in the 2000s, Bates represented Australia on the track at the Athens 2004 Olympic Games in the individual pursuit, and on the road and track at the Beijing 2008 Olympic Games.
Bates made the points race her own claiming dual Commonwealth Games gold in the discipline in 2002 and 2006, a host of World Cup and national victories while also surging to the 2007 world title.

Concurrently with her brilliant track career, Bates spent 10 years racing professionally on the road with a series of Dutch and and American teams and claimed the 2006 Australian Road National Championship  title, while also guiding teammate and sister Natalie to the 2006 Commonwealth Games road race gold in Melbourne.

“My career highlight is definitely my 2007 world title, which felt like the culmination of many minor medals, and many years of hard work, but there were many beautiful moments in my career including my sister’s gold medal at the 2006 Commonwealth Games.

“She was always my inspiration, and It was special to race with her on that day, and stand on the podium with her to celebrate. I really felt that the defining thread of my career has been the incredible people I've worked with, and shared the moments with.

“I want to acknowledge and thank the village of people who helped me through my career, with special mention to my family for their unwavering support, and my coach Gary Sutton for his patience and belief in me. Anything I achieved, I did so because of the team behind me, and I am grateful beyond any words I could articulate.”